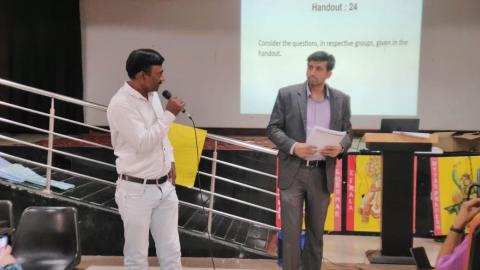 As an educator have you come across these questions?

What is actually taught in schools?

What are the manifest and latent social functions of the knowledge that is taught in schools?

How do the principles of selection and organization that are used to plan, order, and evaluate that knowledge function in the cultural and economic reproduction of class relations in an advanced industrial society like our own?

What is the place of schools in maintaining the way economic and educational goods and services are controlled, produced, and distributed?

What schools do? Who succeeds? And who fails?

What is taken as knowledge, how accessible to different groups

any knowledge is, and what are accepted relationships between different knowledge areas and between those who have access to them and make them available?

What role does an educational system itself play in defining particular forms of knowledge as high status?

What shall be construed as knowledge?

What is considered legitimate knowledge?

What underlying meanings are negotiated and transmitted

in schools behind the actual formal ‘stuff’ of curriculum content?

What happens when knowledge is filtered through teachers? Through

what categories of normality and deviance is it filtered? What is the basic and organizing framework of the normative and conceptual

knowledge that students actually get? In short, what is the curriculum

What is the common-sense?

In whose interest do schools often function today?

What is the relation between the distribution of cultural capital and economic capital?

What if existing social and economic arrangements require that some people are relatively poor and unskilled and others are not?

unequal society in which we also live?

What is the latent role of the linguistic and logical structure of technical, efficiency, and ‘scientific’ perspectives in curriculum and in education in general? Who benefits from such perspectives? How do these categories and forms of consciousness serve as mechanisms of social and economic interest, when they are so clearly guided by the liberal urge to help? Are real, or abstracted, individuals ‘helped’ by these interests?

Whose knowledge is it? Why is it being taught to this particular group, in this

particular way? What are its real or latent functions in the complex

connections between cultural power and the control of the modes of

production and distribution of goods and services in an advanced industrial

“What knowledge is of most worth?”

What is the relationship between culture and economy? How does ideology function?

Whose knowledge is it? Who selected it? Why is it organized and taught in this way? To this particular group?

How, concretely, may official

How do schools legitimate these limited and partial standards

of knowing as unquestioned truths? These questions must be asked of

at least three areas of school life: (1) how the basic day to day regularities

of schools contribute to students learning these ideologies; (2) how

reflect these configurations; and (3) how these ideologies are reflected

in the fundamental perspectives educators themselves employ to order,

guide, and give meaning to their own activity.

Should schools, guided by a vision of a more just society, teach a particular set of social meanings to their students? Should they concern themselves only with

progressive pedagogical techniques, rather than espouse a particular social and economic cause?

How is this inequality made legitimate? Why is it accepted? As Gramsci would put it, how is this hegemony maintained?

Whose meanings are collected and distributed through the overt and

How, then, do schools act to distribute the cultural capital?

What interests do schools serve, those of the parents and children, or

those of the teachers and headmaster? and ‘What wider interests

are served by the school? and, possibly more importantly, ‘How

do we conceptualize “interests” in social reality?’

For whom do schools work?

Where do I stand?

Note- All the questions have been taken from the book Ideology and Curriculum written by Michael W. Apple.