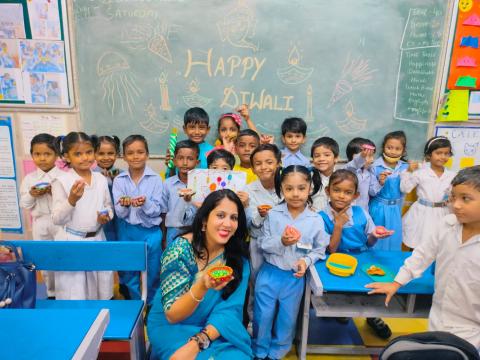 Each of us has a mind that is capable of receiving and generating knowledge. In most cases, it's involuntary work, and that's how millions of people who missed the opportunity to attend school, still manage to survive. An unschooled mind, however, begins with concern for oneself, one's own body, one's own person. Thinking of oneself as a worker or a community member requires an intellectual stretch- a schooling. When work entails fulfilling professional roles, and community entails civic responsibilities, such understandings are distant from early institutions. This is where the need for schooling arises. In a fast moving and complex world and particularly in the era of post-truth (manufactured truth), schooling in itself would not suffice to deal with the challenges our civilization faces today.

First, we need to ensure that our children attend school, and then we need to focus on what our school has to offer. Both can, however, be done simultaneously. A large number of students drop-out of school and only 27 in every 100 reach college. Drop-out rate at the primary level is 0.76 percent which rises to 14.04 percent at secondary level. When we translate this data and understand it in the absolute number, it will be approximately 35 million. It’s higher than the population of some European countries. In the 21st century, where we aspire to make India one of the leading countries of the world, we cannot afford to keep our 35 million children out of school. We have a monumental task of educating our children. The reason behind this massive drop-out rate has been captured in a survey conducted by NFHS. According to NFHS-5, “not interested in studies' was the reason given by 21.4 percent of girls and 35.7 percent of boys aged between six to 17 years for dropping out of school before the 2019-20 school year. The study, conducted under the aegis of the Union Ministry of Health and Family Welfare by the Mumbai-based International Institute for Population Sciences (IIPS), had surveyed 20,084 boys and 21,851 girls on their reasons for dropping out"

It is here that we need to understand where we are lacking. It's a secret hidden at the plane site. Howard Gardner put it beautifully in his book—The Unschooled Mind, he writes "I believe that the primary intellectual mission of precollegiate education is the inculcation in  students of the capacities to think in the ways that characterize the scholars in the major disciplinary families. Once the basic literacies have been achieved,  the acquisition of scientific, mathematical, historical and artistic ways of Thinking-The scholarly disciplines-should assume centre stage"

As a result, the primary purpose of a school is to develop Minds capable of thinking in terms of the major discipline, otherwise people will continue to hold views that are in significant measure unfounded or even absurd. It’s only through the meaningful school experience that we can retain our students and reduce the drop-out. The training of the mind in the discipline, both in its first and second senses, will ultimately lead to the illumination of knowledge.