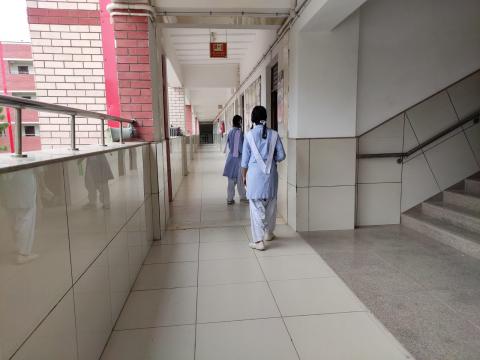 The interminable news of horrific violence against daughters floods the media. The Ankita murder case is the most recent one. The death of a brave daughter of Iran, Mahsa Amini has sparked the massive protest against the orthodox regime that draws global attention. ‘America's deadly epidemic: violence against women’ reports reuters on 20th July, 2022. India or abroad, it appears to be a world not designed for our daughters.

Have you ever been lost in a forest? We wander here and there in search of a path that could lead us out. This is exactly the situation we have created for our daughters, we have left them in a forest without a path. The path that we have designed for them does not treat them equally. The moment they claim equality and freedom we leave them in a state of bewilderment.

This is not difficult to understand. It begins with the ideas related to the birth of a daughter. Still, in most parts of the world, they are not welcomed. Even if they succeed in coming to earth, they are left unattended and many die before reaching one year old. In 2020, the female child mortality rate for India was 33 deaths per thousand live births. Those who survive are left to die before the age of 5. The hindu reports on January 12, 2020 “The global report states that in 2018 fewer countries showed gender disparities in child mortality, and across the world, on average, boys are expected to have a higher probability of dying before reaching age-5 than girls. But this trend was not reflected in India” Our daughters persist. We teach them to fill 'the secondary role' in society, where they fulfill their 'divinely designed' role of motherhood and family responsibilities. By this time, most of them have submitted. However, some resist and we unleash all sorts of horrendous crimes against them.

Law and order have little to do with this situation. The solution lies in the pattern of our thinking and belief system. People prefer the boy child due to the Supernatural Belief that the boy carries the family lineage and becomes a reason for spiritual salvation for parents. And this is considered far more important than any worldly affair. In the world, millions of daughters die because of this belief. In my opinion, there is no other belief which could be responsible for killing at such a mass level. This idea is so deeply rooted that the modern education system appears to have failed to challenge it. Many educated people find themselves attached to this belief. For them, daughters are a by-product. While educated parents do resist this belief system, they often find themselves helpless against the cultural and social hegemony imposed upon them by their parents and relatives. Krishna Kumar equates the educated women in the India society to the famous Mahabharata’s character, Abhimanyu in his book, Choori Bazar Mein Ladki.

The belief in supernatural phenomena has to be dismantled if we want our daughter to live with dignity.

In most cultures, daughters are expected to leave their parents after marriage, which makes them less desirable to most parents. In this system parents are not able to visualize how they will survive in their older age, for obvious reasons, they crave for the boy child. Society needs to be redesigned. We need to believe in the plurality of lifestyles. In the ritual that glorifies daughters for leaving their parents' homes, nothing is sacred. We have to follow people who have imagined life in different ways. It is the youngest daughter's responsibility to care for her parents in Chile, a South American country. The belief in the plurality of life will liberate our daughters from the binding custom of leaving their parents' homes.

There have been several social reform movements in Indian society in the last 200 years, and this brings hope that we can break free from rogue social traditions, rituals, and customs. Every one of us has a role to play; the way we live our lives can influence at least one person in our sphere of influence, and that's how reform gets started. We do not need to wait for massive legislative reform. Interestingly, social reforms are not directly proportional to legislative reforms; even if legislatures bring the change and society is not ready to accept it, it fails. Despite the absence of legal support, social change succeeds if there is an undercurrent of change. Fortunately, being part of a democratic country, we have all the democratic measures available to support anything that promotes equality and freedom. We can commit the most valuable gift we can give to our daughter, the freedom to live a dignified life!